With his magnetized orb he called the terrella (Latin for “little earth”), the 16th Century English “natural philosopher” (and personal physician to Queen Elizabeth I) William Gilbert demonstrated his theory of the earth’s magnetic field.

Born nearly 100 years before Sir Isaac Newton, Gilbert was the founder of the modern studies of magnetism and electricity and is today known as the Father of Magnetism. 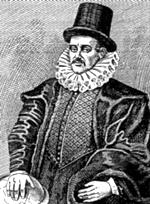 Gilbert’s book “De Magnete” (1600) was the seminal work on magnetic and electric forces. Gilbert coined the term “electrick force” to describe the attraction between objects charged by rubbing them with a cloth. So we can thank Gilbert for explaining – among other things – static cling! 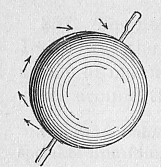 The Terrella, ground from a lodestone, simulated the Earth’s magnetic field

Even more fascinating is the name that Gilbert gave to the space around the earth that is affected by the earth’s magnetism. He called it the Orbis Virtutis, literally the “Orb of Virtue” and in today’s vernacular, sphere of influence. – David M. Kalman