I wrote a draft of this article in mid-2003. Then I chickened out. When it came to the topic of spam, I feared ridicule. With the continuing deluge of spam, I would have had more confidence in an article titled “Achieving World Peace in Three Easy Steps.” For me, it was the proverbial no-win situation. Even the Anti-spam Research Group of the Internet Research Task Force specifically warns off what it calls “anti-spam kooks” who believe they’ve discovered the FUSSP (“Final Ultimate Solution to the Spam Problem”).

Yet four years later, despite attempts at legislative relief, a patchwork of technical solutions, and the formation of the messaging industry’s Message Anti-Abuse Working Group, spam continues to grow. So what have I got to lose? In this article I suggest not a Final Ultimate Solution, but a different way to think of spam that in turn invites solutions.

Why include this article in a marketing/publishing blog? The concepts in this article flow directly from origins of the “BrandMagnet” concept, i.e., that marketers must earn a consumer’s attention with an exchange of value. The marketer offers entertaining or enlightening content, and the consumer pays attention. With that mantra in mind, I started to work on the problem of email marketing and why it has produced such an epic disaster. Some watchers have estimated that up to 90 percent of all email is spam.

The economics of spam

Spam thrives for a reason, and that reason is to make money. A study indicated that in 2004 four percent of online adults made a purchase as a result of unsolicited commercial email. That study, the 2004 National Technology Readiness Survey (NTRS) from the University of Maryland’s Robert H. Smith School of Business and Rockbridge Associates, put the total number of spam responders at five million.

In the economics of spam we find parallels in traditional direct marketing and advertising. A broadcast television viewer understands that every hour of programming includes as many as 20 minutes of commercials. Likewise, postal mailboxes are stuffed with offers, catalogs, and samples. The economics that drive this communication are fundamental to our consumer society. The right to produce this kind of commercial speech has its roots in the First Amendment, yet the courts have acknowledged that there are limits. Despite the annoyance they cause, commercial messages and junk mail are accepted facts of economic life. They strain the public’s tolerance, but for various reasons they stop just short of driving us mad.

The simple yet monumental difference between spam and traditional commercial speech is that the spammer can send 100,000 emails for essentially the same cost (almost nothing) as sending one. The lack of economic inhibition propels spam across the threshold of consumer tolerance. Yet spammers still spam and buyers still buy. This is the context in which we should discuss spam and anti-spam. While the topic is inflammatory, there may be rational solutions that create new economic opportunities for both marketers and email users. The question is whether we can have our spam, and eat it too.

At its root, spam is a socio-economic phenomenon. The combination of an irresistible incentive and minimal investment with an inappropriate technical infrastructure offers incentives for bad behavior. As a consequence, U.S. businesses lose more than $70 billion annually in lost productivity, as indicated by a 2007 survey by Nucleus Research, Inc.

The technical enablers include the spammer’s ability to 1) remain anonymous; 2) send mail from any jurisdiction on the planet; and 3) send massive volumes of email without regard for the receivers’ convenience.

The “socio-” part of the problem is the power imbalance in the relationship between the spammer and the receiver. The spammer has the power to tax the receiver’s patience and resources. At the same time, the spammer makes money from the infinitesimal number of willing and/or naive recipients who respond.

Let’s imagine a world where a combination of technical and legal means makes it impossible for the spammer to send 500,000 emails. The cost in economic terms is the $25,000 in commerce, plus the cost of regulation, enforcement, and technology. Now let’s re-imagine the business model, where recipients have tools for participating in and profiting from this economic activity.

The concept of enticing customers to volunteer or opt-in to receive marketing messages has been around almost as long as marketing itself. (You’ve probably dropped your business card in a fishbowl to win a free meal.) In the Internet context, this idea has been promoted relentlessly by gurus such as Seth Godin, whose book “Permission Marketing: Turning Strangers Into Friends And Friends Into Customers,” described the economic advantages of getting permission to engage customers in deeper, more profitable relationships. The premise that it’s good to get permission is axiomatic. But let’s take this idea a step further.

There’s an implicit cost to an email receiver – mainly in productivity – for each email received. Spam would certainly not be considered a nuisance if its cost could be recouped by the receiver. Instead of blocking or prohibiting the spam, let’s share the value produced with those individuals who bear the cost. This would require an email infrastructure that can transmit funds, but more importantly, an email system that can frame the transmission of email within the context of a monetary transaction. This would allow an email receiver to set a threshold price for permitting receipt of an email message from an unknown sender. The sending and receiving systems would use a transaction processing protocol to mediate, first negotiating the transaction (the acceptance or rejection of the email) and then updating the bank accounts.

In this scenario, the receiver may reject email from an unknown sender unless the threshold price is met. (The sender could define the acceptable price range for the confirmed delivery.) For an email from a new friend, the receiver could optionally click a button to refund the sender’s fee and add the sender to the white list.

Update: A question came up recently in a discussion of economic email. The question was how to ensure that a recipient actually reads an email. The answer is a challenge/response mechanism embedded directly in the email body. It could be a “captcha” or other kind of challenge questions.

This system guarantees that no email can be delivered without the receiver’s permission. Unlike existing white list approaches, this economic email approach doesn’t require the receiver to define “friends” in advance and it permits anonymous email transactions, as long as the transmitted funds are validated by the bank. The economic email model can be thought of as a form of peer-to-peer postage. By putting control in the hands of email receivers, it rebalances the economic system without requiring significant effort on the receiver’s part.

Here’s what an entire economic email transaction might look like (with basic transaction processing terminology appearing in caps). In fact, it looks just like any typical bank transaction, such as a funds transfer or automatic teller machine withdrawal. 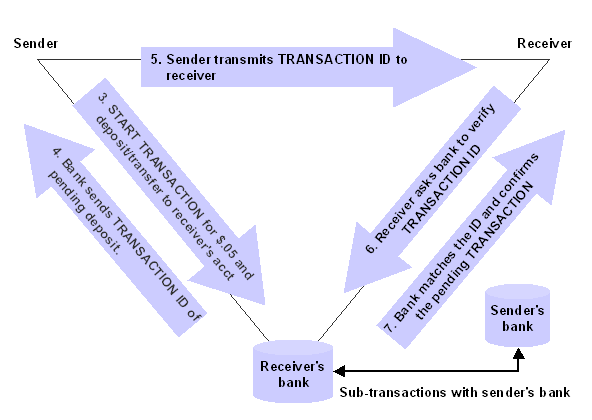 At this point, the funds are in escrow. The sender cannot renege except upon failure of the delivery. In Step 8, the receiver tells the sender that the pending transaction is validated and to proceed with transmission. In Step 9, the sender transmits the email and upon receipt, the recipient sends the instruction to the bank to COMMIT the transaction (Step 10). As far as the sender is concerned, the transaction is irrevocable in Step 7.

The implications of economic email

Let’s look at a simple direct marketing case in which a marketer seeks 5,000 new customers. Assuming a 5 percent response, the marketer would have to mail 100,000 pieces to achieve the goal. With traditional direct mail, production and postage per piece could easily cost one dollar (USD). That’s a lot of money. Translate this program to email, where the cost might reach $200 in list handling fees, and it becomes obvious why marketers love email.

Now assume that the marketer must offer recipients ten cents each to accept an email. That “postage” would total $10,000 – still only 1/10th the cost of the postal mail delivery. Moreover, paying a fee to each recipient would change the nature of the mailer-recipient relationship. As only willing recipients would accept unsolicited commercial email, it’s possible that response rates would increase accordingly.

Email marketing has created a short-term opportunity to reduce marketing costs, but this savings is not sustainable. The email system is at risk of collapsing under the pressure of unrestrained spam, while businesses and individual users bear the burden. An economic approach to email suggests an alternative that gives control to recipients and compensates them for their efforts, while ensuring the viability of email as a serious business tool. The idea of simply charging postage for email isn’t new; however, the idea of paying it to email recipients changes completely the way we think about postage and about email. Whether an economic email model could be implemented with today’s infrastructure is another question altogether. I’ll leave that to the anti-spam kooks searching for FUSSP.

David M. Kalman provides management consulting and services to publishers and marketers. Before that he was founder of Intelligent Enterprise magazine, and prior to that, the Editor-in-Chief of DBMS Magazine and Data Based Advisor.

The cost of spam in terms of lost productivity has reached $21.58 billion annually.//www.informationweek.com/story/showArticle.jhtml?articleID=59300834